So today I had a chance to look through the 1st 90 sets of survey results, hopefully there will be many more. So the first graph below shows just that the average age of diagnosis for the survey group is mid forties and the max is 68 and the low was 12. I think that this combined the results for the second graph suggest either that we are generally diagnosed by the time we are 60 or that people over 60 are less likely to take an internet poll. Graph 2 shows an increasing number of people being diagnosed with age until they are over 59 when the number drops significantly. 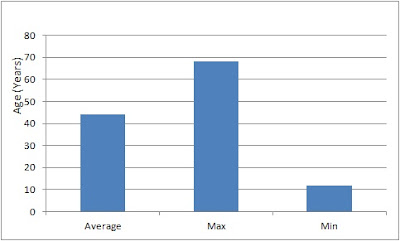 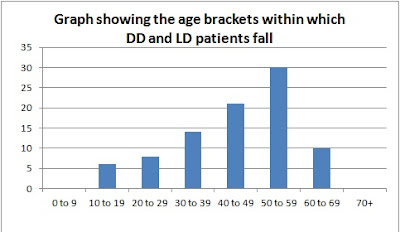 The above graph, graph number 3, shows that nearly 40% of people taking the poll had the condition in more two limbs, about 30% in 1 limb and about 10% each in 3 or 4. This really just shows you have about 7 in 10 chance of getting them in 2 or more limbs. Interesting that it seems to be present more often in 2 limbs than 1. 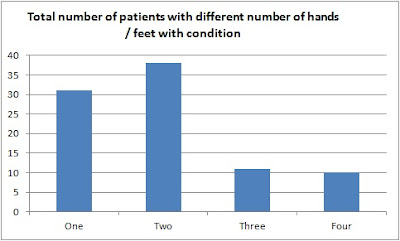 The below graph show that percentage of people taking the survey who may be at risk due to each risk factor (blue). Note that for the family history result I look only at people who knew yes or no, interestingly this showed that over 60% of people had a family history of the condition. In red, as the UK had the highest number of participants, I tried to fine the rough UK average for each risk factor, this showed that there was almost double the number of smokers in the patient group compared to the UK public, but of course we do not know whether they were smoking before getting the condition or not. DD/LD patients seem to drink less than the national average and for the other there are probably too smaller number of people to say anything apart from there were more diabetes patients than I would expect from a random sample of 90 people. 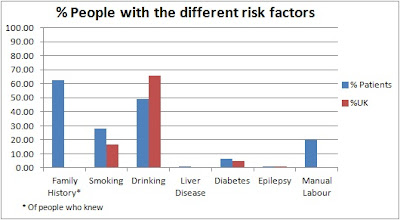 I then split the people with / without and unsure of family history into separate groups and looked to see if there was a difference in the average number of limbs in which the patient suffered. The numbers are too small to say if there is a difference and the unreliability of knowing the medical history of your family but the total average for all patients was helpfully exactly 2. For patients with a family history it was 2.2 and without and unknown were both 1.8. If we take the results for with and without family history at face value it suggests that those with a family history are at a slight increased risk of getting it in more places. 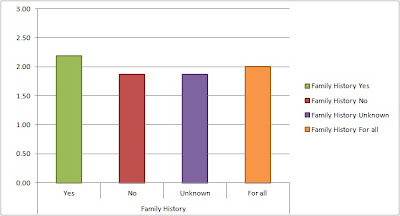 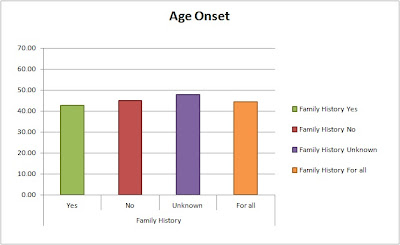 The next 2 graphs look at the same as the above but for smokers and non-smokers and basically smoking appears to make no difference to number of limbs or age of onset. 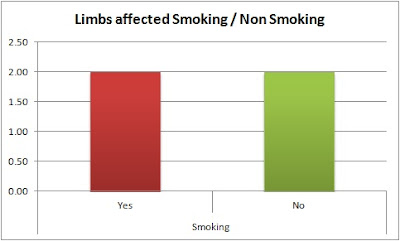 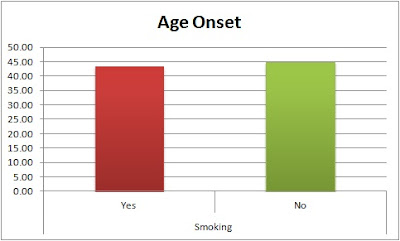 Note that I know I have spelt NA (when spelt out in full) wrong but I didn't have the chance to fix it before doing everything and I am really busy this weekend.

NA was not popular in terms of numbers, neither was physio but both had 100% success in the 3 patients that had those treatments, interesting and I would like to know how severe the physio cases were. Steroid injections had been used in 2 people, in neither did it come back but neither would recommend.

Xiapex stood out, although only 3 patients had it, in all it came back and inn an average time of only 1 year, 1 person still recommended and one said avoid the other said nothing.

Radiotherapy performed fairly well.with 5 patients have no disease come back and 2 having it come back in an average of 4 years but of the 7 patients 5 would recommend it. 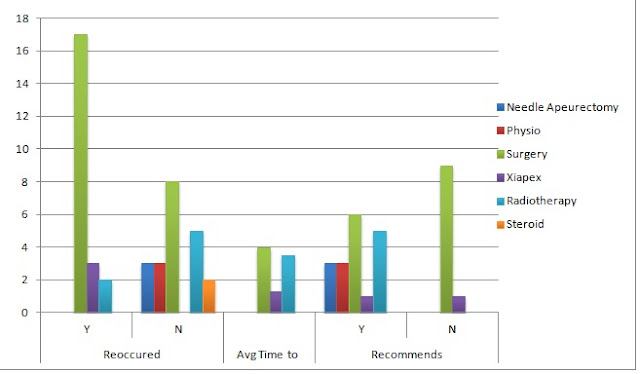 For ledderhose treatments there were not so many treatment options employed.

7 patients had surgery, in 5 it came back in an average time of 2.5 years, 1 person would recommend it whilst 5 said to avoid.

1 person had a steroid injection and it did not come back.

7 patients had radiotherapy for Ledderhose, in no patients has it yet to come back and all patients would recommend. Make what you want of that.

I still want to check whether the risk factors increase the chances of the diseases coming back, do if you have a strong family history have the treatments been less successful, etc etc.

Nothing conclusive and more data would be great and some potential trends still to look at, great to have some data though, particularly the information on the treatment options.
Posted by GaryManley at 22:50 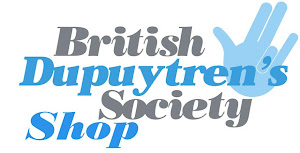